LET'S READ SOME VERSES FROM ODYSSEY 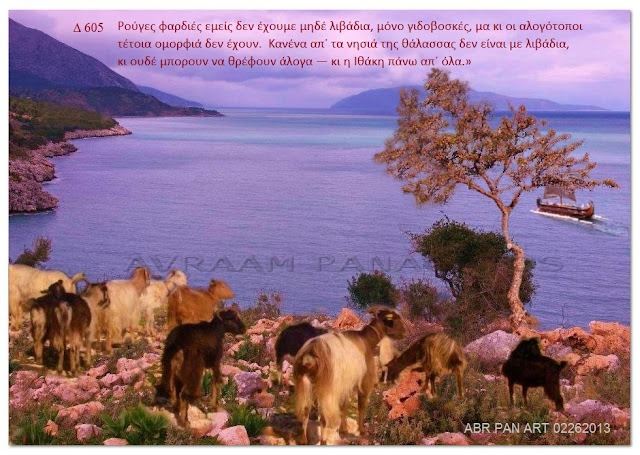 while in Ithaca there are no broad plains or meadows at all. It is goat-pasture, though more varied than fields for horses. None of those islands that slope sheer to the sea are rich in meadows fit for herding them, Ithaca least of all.’

Bk VII:78-132 The Palace of Alcinous
He stood there reflecting, before crossing the bronze threshold, since the radiance of sun or moon shone over the vaulted halls of valiant Alcinous. The walls that ran from the entrance to the innermost room were topped with a frieze of blue enamelling. Gold doors fronted the well-built house, with silver doorposts set in the bronze sill. The lintel above was silver too, and the door-handle of gold. Gold and silver dogs stood either side, fashioned by Hephaestus with consummate skill, to guard valiant Alcinous’ palace. They were ageless and immortal. Inside, seats were fixed along the walls from the entrance to the innermost room, covered with cleverly woven fabrics worked by the women. There the Phaeacian princes would sit, eating and drinking, living lavishly. Golden statues of youths on solid pedestals stood there, with flaming torches in their hands, to light the banqueting hall by night.